Awake in Doolin, a small village off the west coast of Ireland. B&B owned by Marian and Martin Mcdonagh. I can hear foreign voices, muffled and miles from home. Figures blur outside bedroom windows. Breakfast from 8-9:30. I ate a full Irish breakfast with brown bread and marmalade. Drank orange juice and tea. Ash had pancakes. We sat next to a tall gray shaven German man with equally tall raven haired wife. A gang of Americans sat to our front left. They carried a map book and talked about all the places they were going. Another gang of Americans sat beside those Americans. Americans. Together on an island, separated by breakfast tables. Marian is very friendly. Fast Irish talk. “If you want to see the cliffs, its best to do the walk”, she advises, “There’s a road off Fisherstreet that leads to a dead end. Never mind the no trespassing sign. No one cares. Take that road, its about a three and a half hour walk.”

I step outside after breakfast and take photos of the cows across the street. A line of traveling motorcyclists roar by. It’s cold and very windy but sunny. The mountains to the west are covered in a haze. At 9:30 am Doolin is a nowhere town adorned by handmade stone barriers that box grazing cows and dirty sheep. Ireland is full of these stone fences. They lined the entire countryside on our drive west. When the farmers need to move their flock they just make an opening. So simple, yet there’s beauty in it. Flat rocks stacked with precision-ancient artwork. 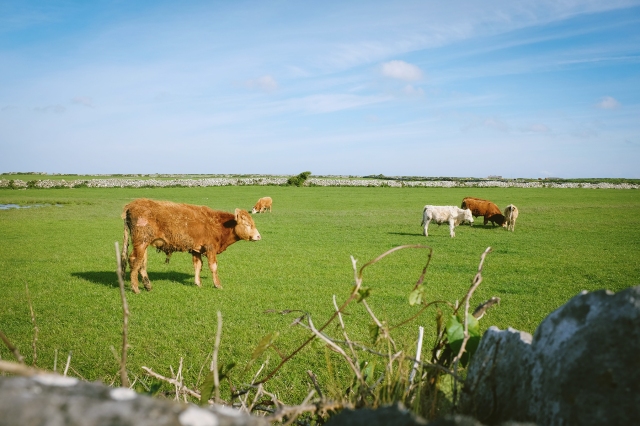 I set the parking break outside O’conners’ pub, close enough to kiss the handmade rock wall. We strapped backs to packs and slowly walked through the yawning rainbow village. Fisherstreet is lined by pubs and restaurants. A book store looks very interesting, no time to stop. The wool sweater outlet is painted purple with a thatched roof. Shoes munched and crunched at gravel under heal, climbing the hill curving sharply left.  It wasn’t long before the chroma buildings became figurines. We reached that fence with the sign reading, “no trespassing” and jumped right over. Then standing there, we look down the one lane road flanked by vast empty fields. And just like Kerouac’s vision I saw God stretching out his forefinger pointing straight at me saying “Go!, Go thou and be little before me.” And we did. The higher we climbed those gravel paths the smaller we became. Until we were like ants, itsy-bitsy and marching up the hillside. Searching for nuggets of truth to bring back home and share. Because it’s when we surround ourselves with great empty spaces, we realize how small we are. Like driving out into the country at night and truly seeing the stars. If we could listen to the stars what would they say? Staring down at the tiny ants, “You are young, small, and know little. We are vast, bright, and ancient.” So I say, throw away your phone and your TV for a bit, and go be small. 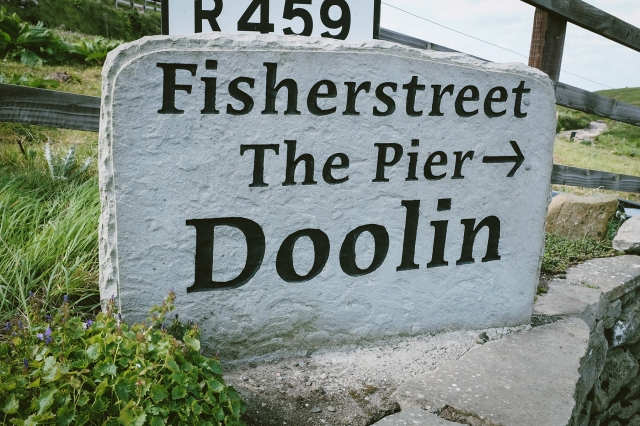 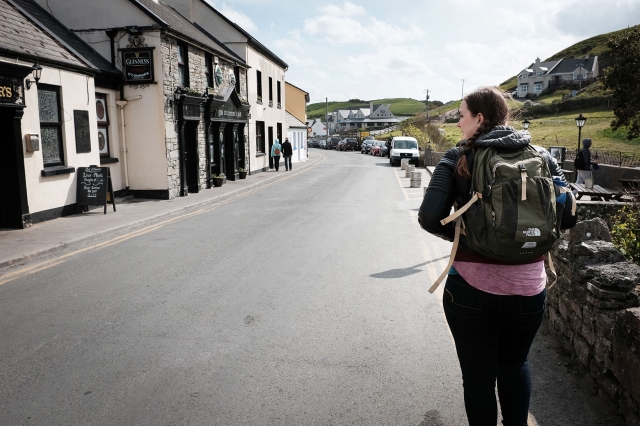 The hills were an ocean of blowing green grass and rippling spongy dirt. The wind roared, pushing us up the makeshift stone staircases. Miles of rusty barb wire connect the wooden dots across earth, zigzagging through trenches, valleys, flat winding roads and steep hills. We play like kids around elderly bridges. “I’m sure at some point a troll must have slept under there.” Wild horses chase each other up and down the hills where silhouettes of castles crumble. We begin to envy them. 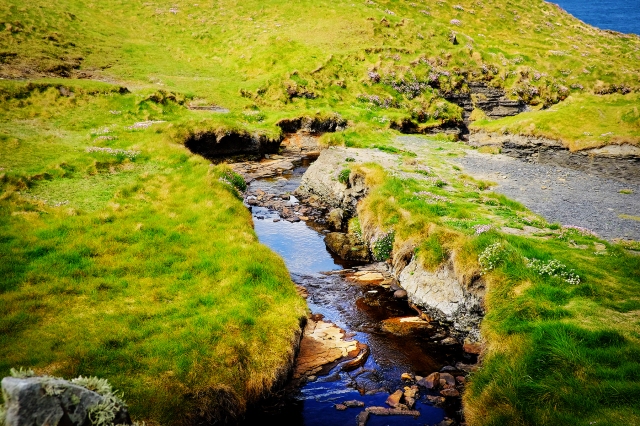 A mile or so into our walk, we start to see other hikers. They come and go. Sometimes we stop to let them pass on the narrow path, nodding hello. We reach the top of a giant hill and see an Irish flag planted, faded and shaken violently by the wind. This must be it we thought and planted ourselves. For a while we sit and just stare at the ocean. There are no fences to guard the edge of the cliff. If ya get too close the wind’ll blow ya right off. So I lye down and army crawl to the edge, camera in hand. A fellow vagabond sits quietly next to us, sketching the cliffs in an old notebook. 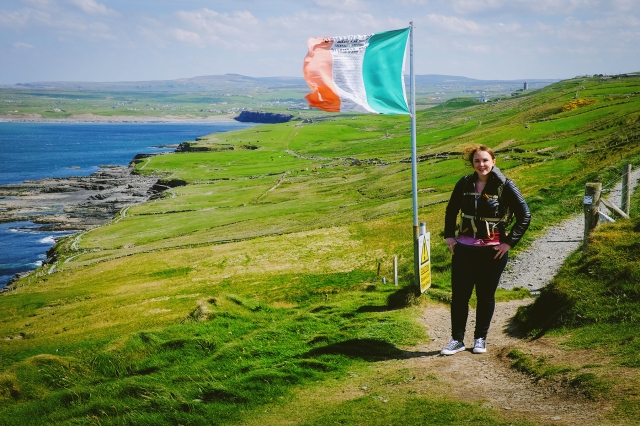 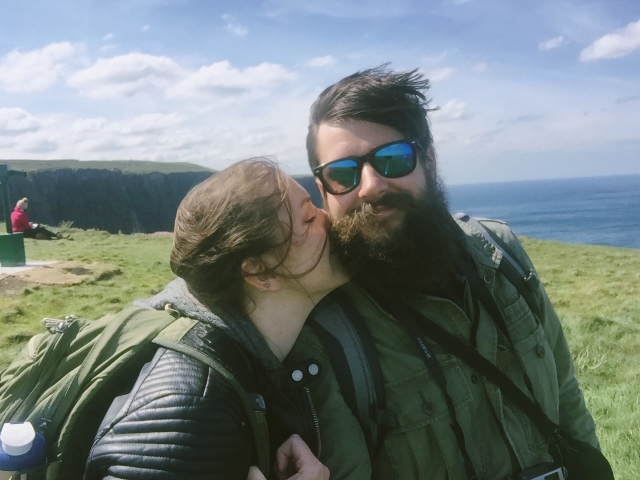 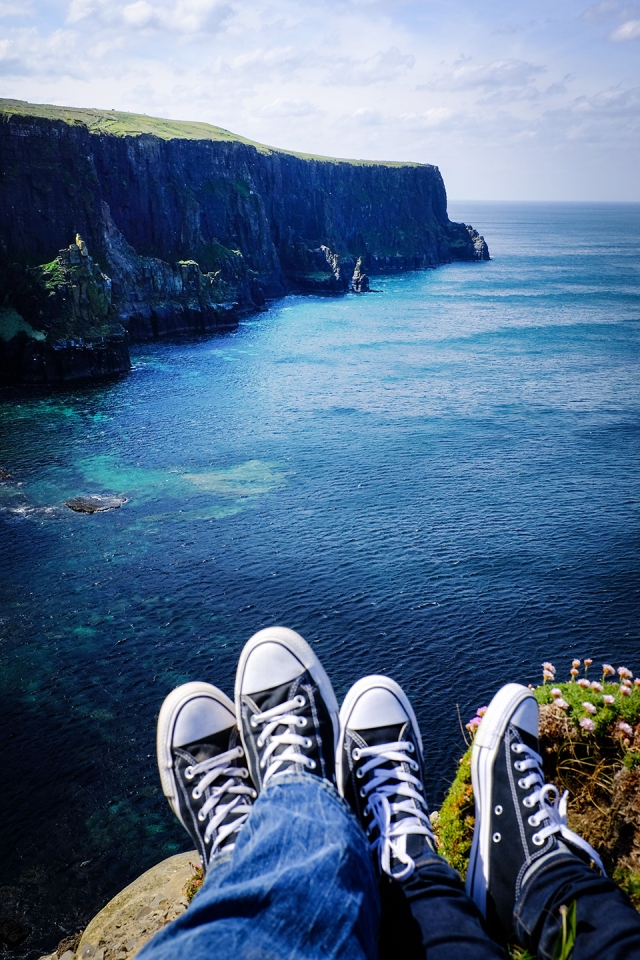 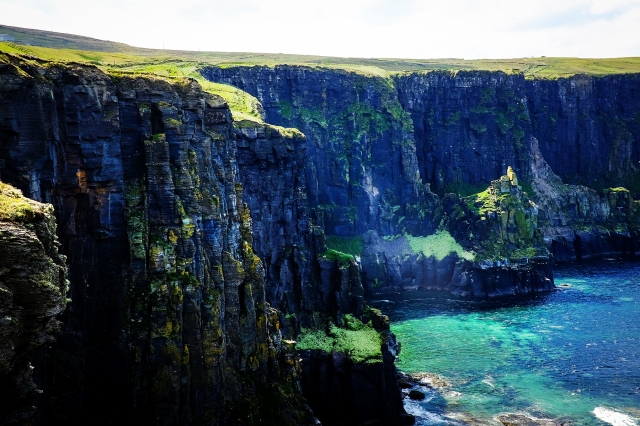 After taking in the sights we notice that the path continues. Same narrow dirt path, same rusty fences. We come to a stone marked “Pat’s View”. Patrick Sweeney is the infamous tour guide of the cliff walk. He escorts the backpacking vagabonds of “Rainbow Hostel” along the precarious path. His tour started at 9 AM and we were too late. The stone marks his favorite view. Farther down the path we talk about Patrick. What he must sound like, Irish accent with wool sweater. I imagine him standing at some cliff edge, surrounded by hikers. Telling sad stories of people who’ve fallen to their death. Speaking of the history the hills can’t tell but the ocean tries to whisper. 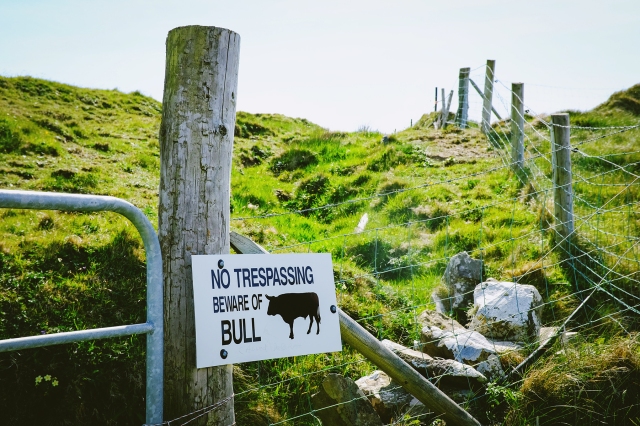 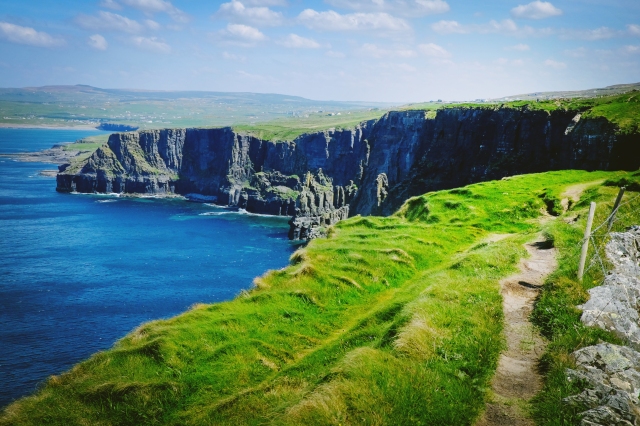 Farther up our climb the trail begins to narrow considerably. It’s at this point we begin to question our decision. We walk on the edge of a continent, tiptoeing slowly and leaning against the wind. There is a giant gap with one slab of rock separating falling bodies from the ocean below. We grab onto the shaking posts and hobble our way across. Then all at once in the distance we see a figure moving along the trail rapidly. It’s the sketchbook vagabond. She was fast. Walking the edge of the cliff like a tightrope, arms stretched out. She wore a red wind breaker and a fancy handmade wool cap. When she finally reached us we paused for a moment to let her pass.
“That’s a nice camera.” she says.
“Thanks. You’re American?” I ask, noticing her accent.
“Yes.”
“We’re from Indiana.”
“Oh nice, I’m from Michgan City.”
“What are the chances?”
“Would you like me to take a photo of you two?”
“Sure, that would be great.”
She takes the camera from my hands.
“Nice, I’ve used one of these before.”
We sit on a small ridge next to the path, the cliffs over our shoulders. She takes a photo, I make some adjustments to the camera settings. She takes several more photos. We introduce ourselves. I don’t remember her name.
“Beautiful camera! Beautiful photo! Beautiful Couple!” she says with a great smile.
Then as quickly as she came, she took off up those trails, hills, and climbs, never to be seen by us again. 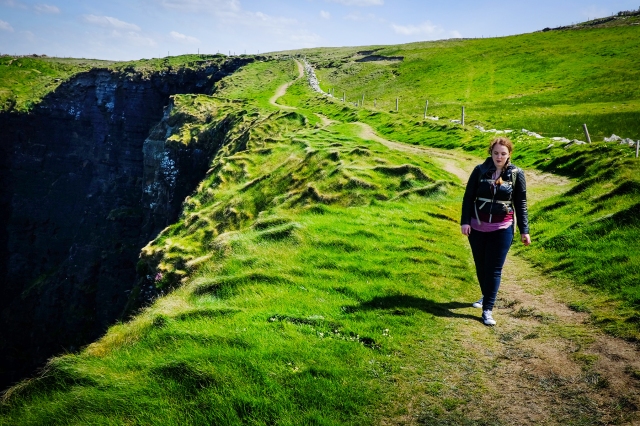 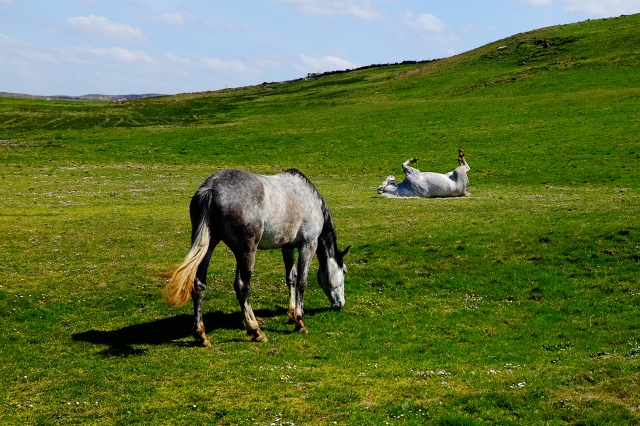 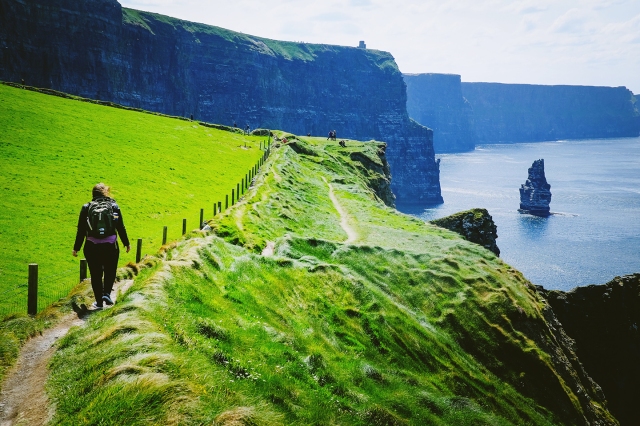 A mile on up the way we find ourselves sitting on a ridge that sticks out over a huge green hill, rolling into the sea. The Cliffs of Moher tower before us. By this time, many travelers had descended the great hill above the cliffs. We sit on the green plateau, eating popcorn as some dauntless traveler takes selfies on his back, head over cliff. Ashley walks on up the hill to take photos and I open a poetry book to a random page:

He is your friend, let him dream;
He’s not your brother, he’s not yr. father,
He’s not St. Michael he’s a guy.

He’s married, he works, go on sleeping
On the other side of the world,
Go thinking in the Great European Night

I’m explaining him to you my way not yours,
Child, Dog, listen; go find your soul,
Go smell the wind, go far.

Life is a pity. Close the book, go on,
Write no more on the wall, on the moon,
At the Dog’s, in the sea in the snowing bottom.

Go find God in the nights, the clouds too.
when can it stop this big circle at the skull
oh Neal; there are men, things outside to do.

Great huge tombs of Activity
in desert of Africa of the heart,
The black angels, the women in bed

with their beautiful arms open for you
in their youth, some tenderness
Begin in the same shroud.

The big clouds of new continents,
O foot tired in climbs so mysterious,
Don’t go down the other side for nothing.

Sitting their at the edge. The edge of a continent. The edge of the world. The ocean was a great crumpled piece of tin foil, reflecting diamond blue skies. Sighing so quietly up the giant cliff side. Dizzy windy grass. There was nothing to say. The mind goes blank, attempting to absorb the big empty space. Look along the ridge at the tiny black ants. We have become so small. Those cliffs are small. This island is small. The ocean is tiny. Our world is a marble. We are specs. 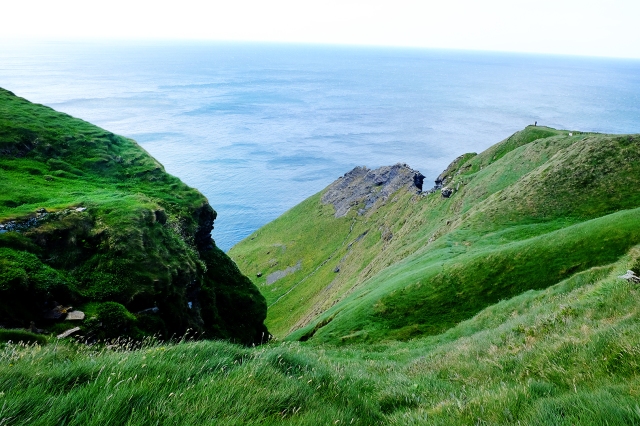 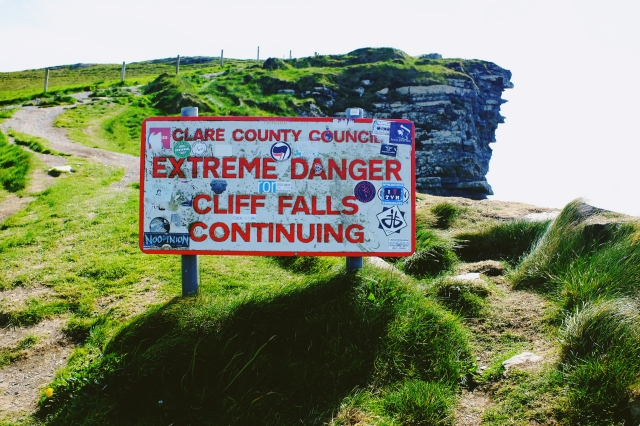 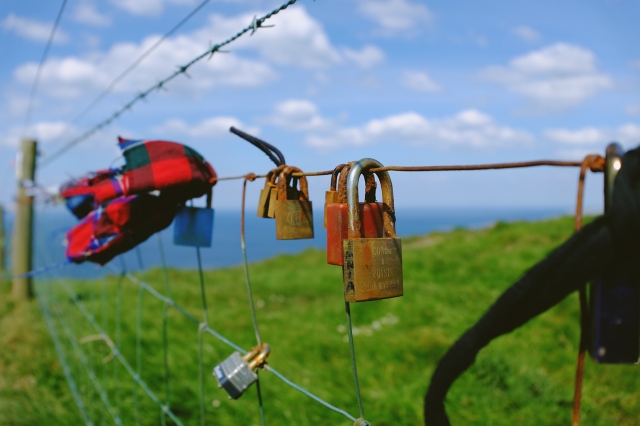 From the plateau we can see Doolin in the distance. We can’t go back now, it’s much too far. Up the hill walk the silhouettes of ants, black along with the candle stick castle. And though our feet are wounded and ragged, we bend towards the wind and climb up that great hill – the tallest hill yet. It’s far and it’s hard. But at the top sits the visitor’s center, and from there we can take a bus back to Fisherstreet. More and more brave travelers climb down the hill, passing us in awe of the view.

Thousands of people poured out of tour buses, we quietly walked past. We were soldiers returning from the front. While mostly alone for the whole trip, now crowds of people brushed our shoulders and stretched necks to see the cliffs. But unless they hop that fence and go down that mountain side, and over those hills, and down those paths, they’ll never see it like we did. They’ll never feel the end of the earth under their feet. They’ll never look up towards the cliffs. They’ll never see Pat’s view.

They’ll have to experience being small, behind a great man-made rock-wall.

So there we were again, two worn out weary travelers. Tired to the bone. Sucking down gulps of cinnamon, creme, and espresso. Nursing tired feet and talking about when we’ll do it all over again.

walk the ant’s path
tiny roadway
cracking clay and mushy grass
shaking hand posts
sharp as rust
past the great leaking gaps
that’ll gulp ya down
stone plate bridges
stairways of rock
take photos of the rocks
eat popcorn and let wind carry it away
hitting strangers who speak
foreign languages
and we sit here
feet blistered
watching the ants climb
black on great green earth
“We missed you Patrick Sweeney!”
“We missed your stories.”
“We missed you Patrick Sweeney!”
“On road sign post.”
“We missed you Patrick Sweeney!”
“But we saw your favorite view.”
tip-toe your blisters
on the teeter-totter flat rocks
hold your shoulders
don’t look down
hold your bones
whose bones are those?
rabbit bone?
whose holes are those?
A   N   T   S
marching
I watch an Italian couple
dance down the edge of the world
blue diamond sky below
sigh old sea
tell us your stories
the tallest sharpest cliff is black
the tiny birds white
C   L   I   M   B
D   I   V   E
L   A   U   G   H
lay on your belly
be small