“Unpredictability. Accidents. Not good when you’re engaging in, say, brain surgery, but when lighting…wonderful!” -Joe McNally

If I were to describe Nick with one word it would be curious.

Nick is the most curious person I’ve ever met. In fact, if you’ve spent 5 minutes with the guy chances are you’ve googled about a hundred sporadically unrelated topics. While honestly it can be intimidating and sometimes intense, I see it as an amazing attribute.

I want to be curious.

In Sean Patrick’s book, Awakening Your Inner Genius, he outlines 4 characteristics that define genius. One of those being an immense curiosity. After meeting Nick and getting to know him, I was reminded of this. Nick’s curiosity inspired me, so much so that I have begun to apply it to my life in pursuing photography.

I became curious about learning everything photography. That curiosity has lead me to discover podcasting, endless books on photography and entrepreneurialism, and life in general. I began asking more questions. That’s the key really, asking more questions. I’ve forgone the notion that I may seem ignorant. Heck, by asking questions, I’ve learned I’m pretty ignorant. But that’s ok.

Life is full of answers, you just have to be willing to ask questions.

Back to Nick. Another word I would use to describe Nick would be ninja. Ninja Nick.

Nick is kind of obsessed with ninjas. He is well versed in the culture and practices of the ninja way. He follows hilarious ninja blogs and true to Nick fashion, has probably watched countless hours of ninja youtube videos. Nick has a complete authentic ninja suit along with all sorts of ninja weapons. In this I saw opportunity. I asked if he would allow me to photograph him. He agreed. Commence ninja Nick in full ninja garb. 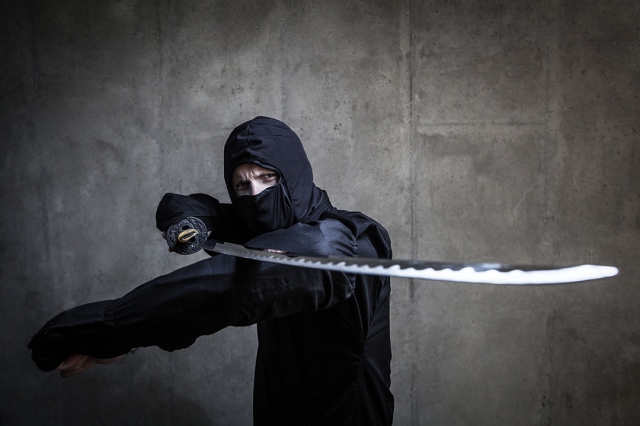 When I plan a portrait session, I have about 4-5 solid photo goals. I’m lucky to get one. If I’m really lucky, I’ll get something I didn’t plan for.

I accidentally left my light on behind me when I was doing test shots. This turned out to be one of my favorite photos from the shoot. “The Ninja lurking in the shadows.”

For Nick’s portraits I wanted to have an “underground” feeling to coincide with the Ninja theme. We took to a tunnel just outside of town. Unfortunately on the day of the shoot it was windy AF and my 60 inch umbrella was rendered useless. This threw me off, along with the unseasonably cold temperatures. 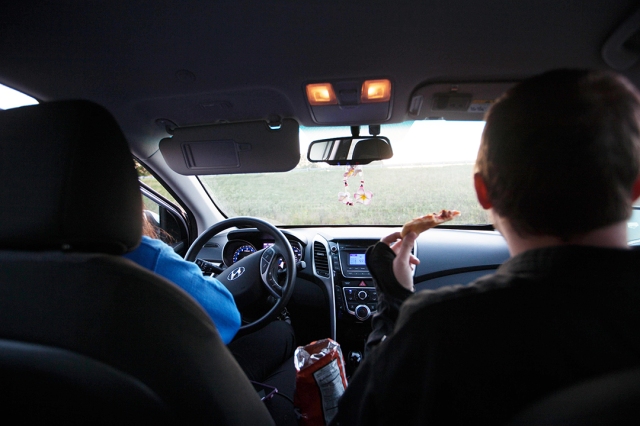 We took a short pizza break to warm up and let the sun go down.

As a photographer, there are so many things you have to focus on all at once. My camera settings, my exposure, my flash, my subject, the background, the pose, the story, etc. Here’s a perfect example of being focused on the subject so much that I forgot my second light was still on. It was going off behind me and casting these huge shadows. Irritating.

The sun set and we were finally getting warmed up. I took about 200 photos and ended up with just a handful of really great images.

Photography is all about rolling with the punches. You can plan and practice but at the end of the day the possibilities for lighting, posing, props, subjects, all that jazz, are endless. The possibilities for things to go wrong are also endless. I try to go into every shoot knowing this and just being happy with what I can get. We ran into a few issues with Nick’s portrait session, but we rolled with them and came out with some neat images.

I learned two important lessons shooting Nick. One, know where your freaking lights are at all times. Two, bring a backup light modifier in case your freaking umbrella blows over. Duh.

Nick’s session kicks off my journey to build a new portfolio and capture images of the people who are in my life. I want to photograph as many people as I can and tell their story. Despite the hang ups, Nick’s shoot was great and I’m happy to share the images we captured. Thanks for reading.

“Do not be afraid of mistakes. They will be with you always,every time you put a camera to your eye. [If you] shoot safe, and don’t at least occasionally court disaster, you are not trying. Time to hang up the camera.” -Joe McNally