“One day I will find the right words to say and they will be simple.” -Jack Kerouac

Hi. My name’s Tim and I’m a photographer.

That’s about as simple as I can get. For the expanded version, continue reading,

There are many attributes that I could use to describe myself besides “photographer”. However, to keep things simple, this blog will be all about photography.

When I set out to write this blog I had several goals in mind. The first goal was to explore where I’ve been, where I am, and where I’m headed as a photographer. The second goal is to work on my communication and writing skills. I’m a fairly introverted person and I store much of my thoughts somewhere in the back of my mind. This blog is an exercise in writing and getting out all my thoughts on paper. The third goal is to share my story. I want to share what I’ve learned in both my failures and achievements.

Side node: the kid with the bummed ankle will be my brother in law.

I started as a “photographer” in middle school with a disposable camera. Here is one of the only photos of me from that time period, crappy camera in hand. Looking back I can remember being inspired by the photographs on my mom’s old vinyl records. When I started buying my own albums, it was the photography and artwork in the CD booklets that caught my attention. I began photographing my friends and all the goofy things that we did. I loved documenting everything. I had absolutely no idea what I was doing, just point and shoot. 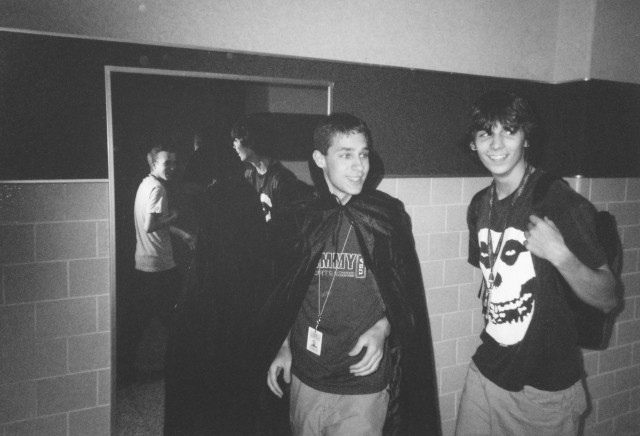 I kept doing this all throughout high school. Eventually I bought a “nicer” 35mm camera with an adjustable lens. I shot an entire role of film on the last day of my sophomore year. At the end of the day, I dropped it, breaking the camera and exposing the film. After that I went back to shooting disposables. At that time photography was a hobby. I never considered doing it professionally. In fact I had no idea what I wanted to do with my life. When I graduated I went straight into college, lost with no clue.

That’s when I met this girl. She had a smile that was ridiculous (its still rediculous). We became best friends and I switched my major to psychology. We began taking every class together. We did this all throughout our college career. Naturally I began photographing her.

Ashley became my muse. I upgraded from the disposable camera to a simple Kodak point and shoot. It was the first time I was able to experiment with manual controls. Things like shutter speed, ISO, and aperture were now able to be manipulated. However, I still wanted more control over the lens. I started researching cameras during class. I was in “Psychology of Learning” and googling DSLR cameras.

After joining flickr and becoming enthralled with the photographic community, I convinced myself to buy a Canon Rebel something or other with a 50mm lens. Shortly after I snapped this photo.

Boom. I was hooked. As a photographer you will reach milestones along your journey. This photo represents that moment where something snapped (cheesy pun intended). I wanted to be a photographer. For reals.
After that, everything changed.